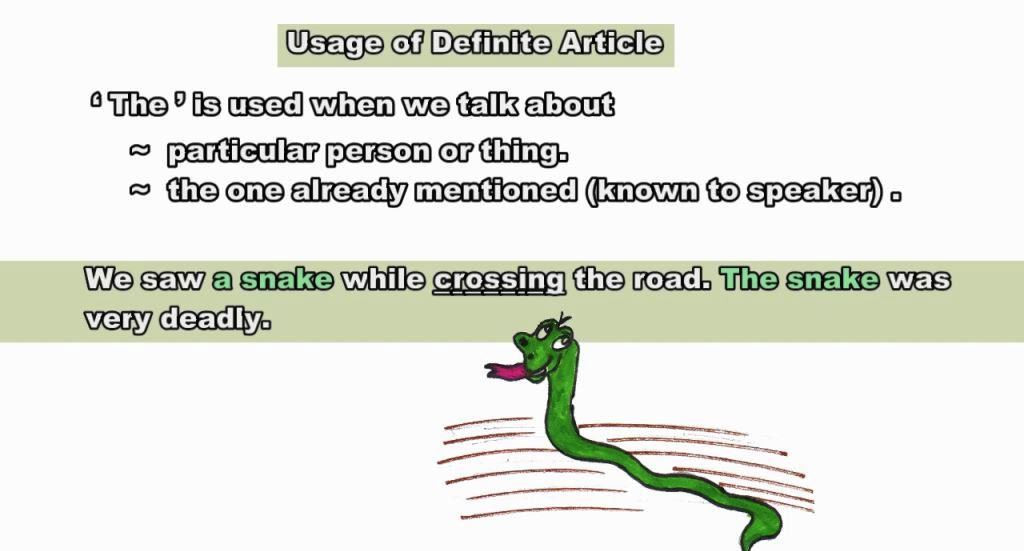 'The snake' is used in the second sentence as we are talking about the same snake which we saw while crossing the road.

There is vast usage of the definite article the in sentences. Now we will discuss almost all the places where the is used.

Definite Article the is used before the first Noun in construction:-

-The Jalabies of Indore are very famous. (correct)

Definite Article the is used before some Adjective:

► The is used before the adjective of Superlative degree.

- Reena is the tallest girl in the class. (correct)

- Jupiter is the biggest planet in our solar system. (correct)

► The is used before the Comparative degree in case of choice out of two persons or things.

- Reena is the taller of the two girls. (correct)

- This is the better of the two options. (correct)

-The harder you work, the luckier you become. (correct)

-The more he gets, the more he demands. (correct)

- The higher you go, the cooler it becomes. (correct)

The is used before adjective same and whole.

-This is the same car that I wanted. (correct)

-The fourth topic of this Course is pronoun. (correct)

Definite article 'the' is used before :-

(a)  Name of rivers like the Yamuna, the Narmada, the Brahmaputra

(b)  Name of oceans/ sea like The Pacific Ocean, the Indian Ocean, the Black Sea.

(c)  Name of gulfs, deserts, forest like The Gulf of Mexico, the Sahara, the Black Forest.

(d)  Name of mountain ranges like the Himalayas, the Vindhya’s. But not before single mountains like Mount Abu, Mount Everest.

(e)  Name of religious and mythological books like The Ramayana, the Gita, The Bhagwat.

(f)   Name of religious communities, political parties, Govt departments, armed force like The Christians, The Hindus, The BJP, The Congress, The Judiciary, The Navy etc.

(g)  Name of ships, trains, airplanes Like The Duranto, The Rajdhani, The Meghdoot.

(h)  Name of newspaper, musical instruments, part of the body, dates etc. like The Times of India, The Keyboard.

(i)   Names of heavenly bodies, directions, unique things like The earth, The moon, The west, The east. But ‘the’ is not used before heaven, hell, God, parliament, direction + place (don’t use the) like South Africa, Eastern India etc.