Preposition ‘to’ is used after Adjectives ending in -ior like senior, junior, prior, superior, inferior, posterior etc.

- Reena is senior than Riya. (incorrect)

- Reena is senior to Riya. (correct)

Note:- This rule is important, questions are framed from this rule in competitive exams.

When we compare two qualities of the same person or thing. We should not use comparative in ‘er’ format instead we should use more + Positive degree. 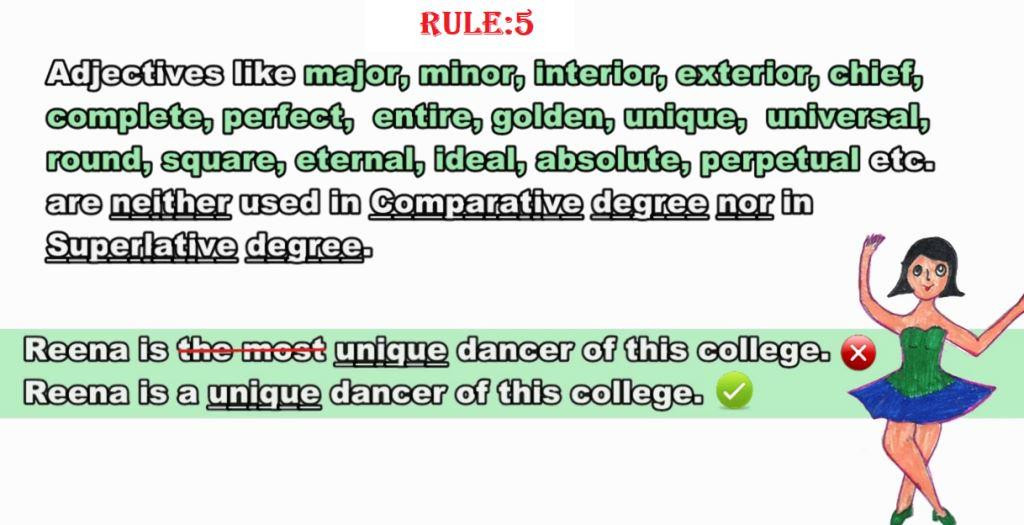 these adjectives represent quality which is complete in itself i.e. in highest degree.

Use of Article with Superlative and Comparative degree

Article ‘the’ is used before Superlative degree; also

Article ‘the’ is used before the Comparative degree in case of choice out of two persons/ or things.

- Reena is the tallest girl in the class. (correct)

- Riya is the more beautiful of the two girls. (correct)

Other Rules: Degree of Adjective

Comparison must be made with similar quality or similar set of things.

-The articles published in this newspaper are better than that newspaper. (incorrect) [incorrect comparison: ‘articles of one newspaper’ is compared with other ‘newspaper’]

Superlative degree of adjective can be converted to Comparative degree. like

Note:- While using Comparative degree in place of Superlative degree, it is necessary to exclude that object from the comparison.

Like in the above example, if we cannot write

However we can write,

- Priya is taller than any boy in the class. (correct)

Note:- Questions are framed in competitive exams by not excluding the object.

Double Comparative or double Superlative degree are not used in a sentence.

- Priya is the most tallest girl in the class. (incorrect) [most and tallest both are adjectives of Superlative degree]

- Priya is more taller than any other girl in the class. (incorrect) [more and taller both are adjectives of Comparative degree]

To correct sentences, we should use single superlative tallest in the first sentence & single comparative taller in the second sentence.

- Priya is the tallest girl in the class. (correct)

- Priya is taller than any other girl in the class. (correct)

Note:- We can use two comparatives in a relative sentence (when there is mutual relation b/w two sentences/ phrases).

- The harder you work, the luckier you become. (correct)

♦ We should not confuse this with the rule above.

When two adjectives are joined by a conjunction (like:- and) then both the adjectives must be in same degree.

-I have the best and a cheaper magazine. (incorrect) [best-Superlative degree, cheaper-Comparative degree]

-I have the best and the cheapest magazine. (correct)

-Riya is wiser and stronger than Reena. (correct)

♦ Note: when two adjectives are joined by a conjunction and both adjectives take different prepositions, we must specify them.

- Ram is as good as if not better than him. (correct)

Rules related to Demonstrative Adjective. (each/ every/ either/ neither)

After Each/ Every/ Either/ Neither singular noun and singular verb is used.

Each is used for one of two or more thing.

Every is used for more than two things.

Either/ Neither are used for only two persons or things.

- You have to select either this or that shirt. (correct)

♦ However, after each of/ Neither of/ Either of ⇒ plural noun + singular verb is used.

- Each of the girls has a bicycle. (correct)

- Neither of the girls received a present. (correct)

► Note:- Article (a, an, the) is not used before the nouns immediately used after each, every, either, neither.

- Either a video will serve the purpose. (incorrect)

- Either video will serve the purpose. (correct)

If ‘the’ is used before adjectives like rich, poor, meek, blind etc they become plural common nouns representing whole class of persons.  Hence, we should use plural verb with them. We should not make plural of these adjectives (common noun).

- The rich is not always happy. (incorrect) [‘The rich’ is plural common noun]

- The rich are not always happy. (correct)

- Alms are given to the poors. (incorrect) [the poor is itself a plural common noun]

- Alms are given to the poor. (correct)