You must be perplexed at this point, given the hundreds of rules described in the preceding chapters. However, with the help of the wall stick notes provided at the conclusion of each chapter, you may review all of the rules and begin this tedious but crucial Topic Adjective.

An adjective is a word used to qualify a noun or pronoun (describe quality). Adjectives are usually positioned before the noun or the pronouns that they qualify but are placed after verb (linking verb).

- She lives in a beautiful house. [‘beautiful’ is an adjective, describing the quality of ‘House’)

- Her house is beautiful. [used after verb (linking) is]

Adjectives are divided into eight or nine types, but they aren't very crucial in competitive exams, so we'll skip them.

Most of the questions in competitive exams are from the comparison of adjectives for which we need to understand the degree of comparison. There are three degrees of comparison: - 1) Positive degree 2) Comparative degree 3) Superlative degree

1)     Positive degree:- It is used to describe the quality of a person or thing. It is used when no comparison is made.

2)     Comparative degree:-  It is used when the quality of two persons or things is compared.

3)     Superlative degree:- It is the highest degree of comparison used when more than two persons or things are compared. 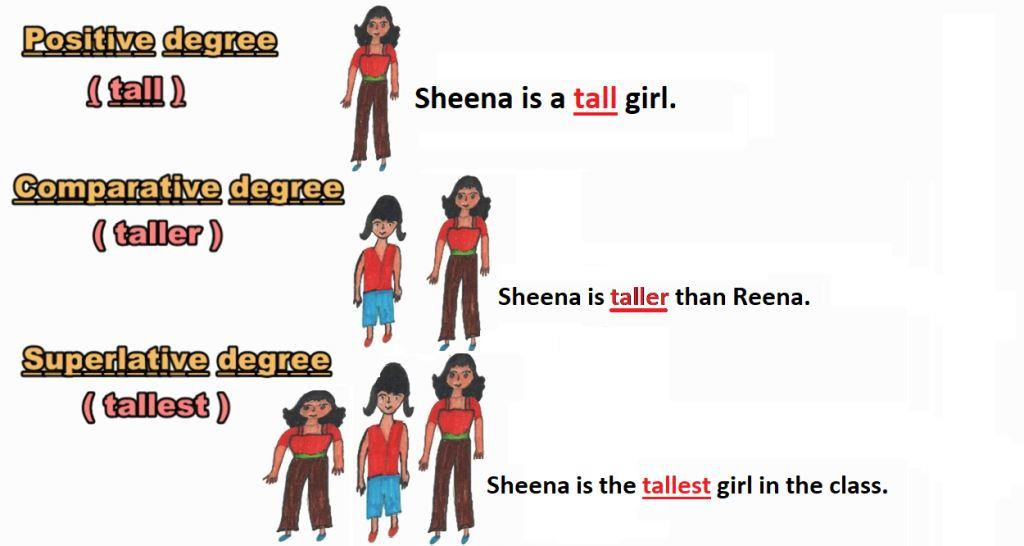 In the above example, tall, taller and tallest are adjectives of positive, comparative and superlative degree respectively.

We use Positive degree of adjective in the following cases.

- Riya is as taller as Reena. (incorrect).

- Riya is as tall as Reena. (correct)

b)     After comparatively or relatively, the adjective of Positive degree is used.

- He is comparatively weak in maths. (correct) [not weaker]

c)      Positive degree of adjective is used before enough.